Massage is most often regarded as a bit of a luxury in the West, where it seems to be associated more often with spa retreats and sports injuries than with energy healing, as it is in the East.  Indeed, in Eastern traditions, massage is more a way of life than a means to recover from a long week of stressful work. As a matter of fact, Eastern tradition holds massage to be quite a necessary—even sacred—part of everyday life; part of healthy living.

While Swedish massage, as taught at IKRA Massage Therapy School is the most common modality in the West, here are some of the massage modalities most common to Eastern massage. 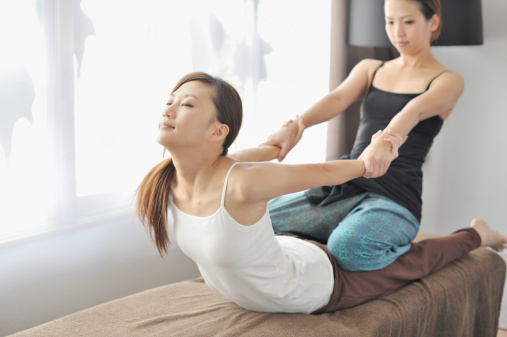 If you have not heard about acupressure, you might be familiar with the Chinese practice of acupuncture.  This, of course, is a healing technique which involves poking needles into the skin along certain energy meridians to encourage healing and recovery of certain conditions and diseases.  Acupressure, then, follows the same philosophy but without the threatening needs.

According to Chinese medical theory, acupressure (acupuncture) recognizes that the body has special points along these body meridians that can improve the flow of “qi”, the life force.  The science describes that the body has 12 meridians which is a network of channels that connect specific organs to each other and other parts of the body.

If this is starting to sound familiar, you might appreciate that these ideas are the foundation of reflexology. This is an alternative healing method which attempts to resolve pain and inflammation by manipulating areas on the hands and feet to unblock body meridians.

Shiatsu massage has an interesting history.  The term is Japanese but it actually has a foundation in Chinese bodywork traditions.  Translating to “finger pressure,” the term came out of the ancient Japanese massage modality “anma,” and anma was derived from an older Chinese technique called “tui na,” which dates back perhaps as far as the Nara Period (between 710 and 793 CE). Shiatsu is unique in that involves intense percussion and stretching of the muscles with fingers, thumbs, feet and palms.

Also derived from an ancient healing system Thai massage may be a bit intense for people in the West, who might be more akin to Swedish massage.  Thai massage incorporates acupressure and assisted yoga poses, and takes many principles from Ayurvedic tradition, an Indian healing system.

Types Of Medicine That Health Professionals Use